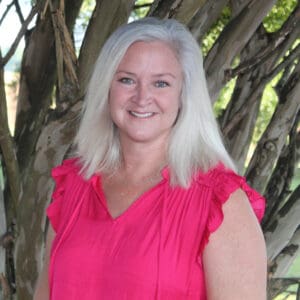 Contact Courtney Burnette by email using the form below:

Courtney grew up in Bolivar, Tennessee, graduating from high school in 1991. She attended Tennessee Technological University from 1991 – 1995 earning her Bachelors Degree in Multidisciplinary Studies with a concentration in education grades 1-8. Courtney’s career in education began in 1995 in her home town of Bolivar at Bolivar Elementary School where she taught fifth grade for one year. Following that year, she spent the next ten years in Gibson County Special School District teaching fifth and sixth grades in Medina for seven years and the next three years working as an Exemplary Teacher for the county, traveling to schools throughout the district and working with teachers and the central office. While working for Gibson County Schools, she earned her Masters of Science degree in 2001 in Leadership and Policy Studies with a concentration in administration and supervision from the University of Memphis. Courtney’s next ten years were spent at the University School of Jackson (USJ) in Jackson, Tennessee, teaching second grade for two years, serving as the academic advisor and testing coordinator for middle and upper schools for one year, then moving into the Director of Middle School position, where she served seven years. Since 2016, Courtney has been the Head of School here at Fayette Academy enjoying the excitement of growth and the challenges of adding new and exciting programs as well as curricular and extracurricular opportunities for Fayette Academy students and families.

The solid thread throughout Courtney’s life has been her faith. Growing up in church, accepting Christ as her Savior, and learning early to lean into the grace and mercy of God, she trusts fully in the Bible, Biblical principle, and relying on God for strength and direction. Courtney’s prayer is to always be in the middle of God’s will in every aspect of her life, including her leadership at Fayette Academy.

Courtney’s greatest blessing is her salvation, but has been truly blessed by her husband, Tim, of twenty-five years and her daughters Chloe and Camille. She is thankful all four of them have had the opportunity to experience the blessings of Somerville, Tennessee and Fayette Academy. As a parent of Fayette Academy students, she recognizes the value of a Fayette Academy education and blessings of being part of something bigger than themselves.